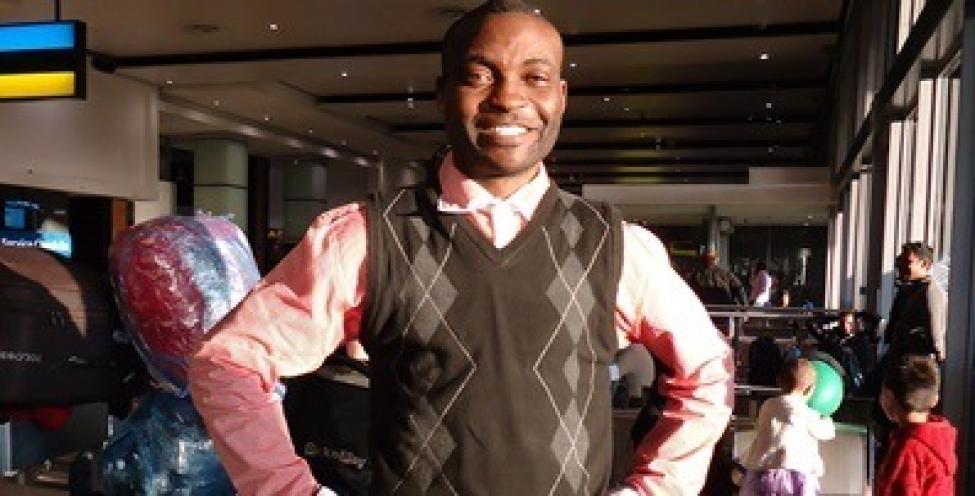 IOM South Africa celebrates the success of an Assisted Voluntary Return (AVR) beneficiary whose long awaited return back to his home in the DRC had been delayed for more than a year because of his medical condition.

Chris Luviringa has been away from home for almost a decade, today with the help of IOM, he gets a chance to reunite with his family again. At the O.R Tambo international airport, Luviringa puts on a huge smile before expressing his gratitude to IOM for assisting him during his stay in South Africa and now his return to DRC.

In 2004 Lurivinga, a qualified teacher , left the Democratic Republic of Congo (DRC) and travelled to South Africa in an open truck for the first time in search for greener pastures.

As a teacher Luviringa strongly believed that if he stepped outside the borders of his own nation they would be better opportunities for him and his family. According to him, leaving his newly born daughter, his four young boys and his wife was not the easiest thing to do but he had no choice.

“I remember we travelled for about a month in an open truck from Lubumbashi to South Africa”, he said.

According to the recently released IOM Initial findings on health vulnerabilities of migrants in mixed migration flows from the East and Horn of Africa and the Great Lakes to Southern Africa, many migrants still undergo this journey using container trucks, boats and sometimes even on foot. Conditions under which they travel pose serious health risks like suffocation and sometimes death. Luviringa was lucky to have made it to South Africa in good health.

To his surprise, when he got to South Africa life did not turn out according to his expectation. He says because he did not have proper documents, he had no other choice but to settle for a job as a security guard for about three years.

In 2009, Luviringa was diagnosed with bipolar. Zoe Rohde, an AVR program assistant from IOM Cape Town, who has been handling Luviringa’s case says because he was far from home, he had no one to care for him. “He became destitute”, Rohde said.

In February 2012 during xenophobic attacks in South Africa, Luviringa was shot in the stomach, whilst working as a gardener in a suburb in Cape town.

“After I got shot, I wanted to go back home”, Luviringa said.

Rohde says when she first met Luviringa after the gun shot, he was very vulnerable and weak. “His mental health was very poor at that time”, she said.

Whilst IOM was still trying to organize his return back to DRC, Lurivinga was frequently admitted to psychiatric hospitals, this made the process even slower.

“We (IOM) were still trying to find a medical escort to take him home”, said the program assistant.

One of Lurivinga’s plans when he gets home is to go back to full time teaching and provide for his family. “Teaching is my career, and I am going back to teach”, he said.