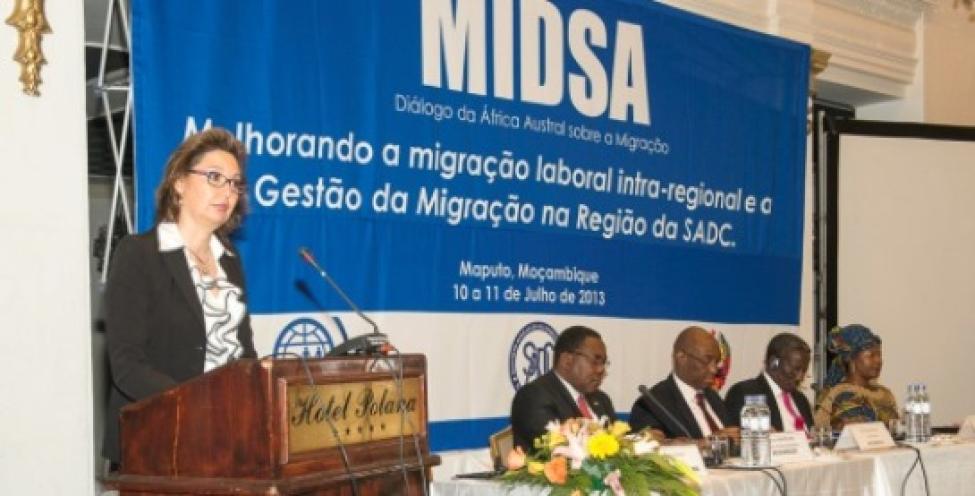 The Second Ministerial Conference on Migration Dialogue for Southern Africa (MIDSA) under the theme “Enhancing Labour Migration and Migration Management in the SADC Region” was held on Thursday 11 July 2013 at Hotel Polana, in Maputo, Mozambique.

The Conference was hosted by the Republic of Mozambique with support from the SADC Secretariat and the International Organization for Migration (IOM).

The overall objective of the Conference was to discuss and to make recommendations on how SADC member States can comprehensively address the management of migration including labour migration in the region.

The meeting of Senior Officers was opened by the Honourable Maria Helena Taípo, Minister of Labour for the Republic of Mozambique, who said she hoped the Conference will provide concrete action points to implement recommendations on labour migration management, taking into account the reality on the ground.

The opening ceremony of the Second Ministerial Conference was opened by the Honourable Oldemiro Baloi, Minister of Foreign Affairs and Cooperation for the Republic of Mozambique who called on Member States to share experiences and good practices from their respective countries regarding the management and control of migration in the region, as well as to jointly explore opportunities leading to the implementation of the Regional Action Plan on Labour Migration in Southern Africa.

In her opening remarks, IOM Deputy Director General, Laura Thompson, expressed the need for a government-led process that is informed by regional development objectives and priorities, and where the role of IOM and other partners being a supportive one.

Ministers welcomed the Regional Action Plan and called upon fellow member states to support the implementation of the plan.

The Regional Action Plan on Labour Migration contains key priority areas relating to labour migration in the SADC region in which SADC Member States commit themselves to translate the provisions of the recommendations on labour migration into concrete action in their respective countries.

Ministers expected the Action Plan to contribute to enhanced cooperation amongst SADC Member States to effectively manage migration in the region.

Ministers acknowledged that harmonisation and integration of national policies and strategies relating to migration management is important and there was growing recognition among SADC member states that well managed migration can contribute to development.

Ministers further acknowledged that well-managed labour migration flows, protection of the rights of migrant workers and effective responses to irregular migration can lead to mutual benefits for both migrants and Member States.

On Migration Management:
-Member States agreed to enhance regional coordination through the establishment of migration focal points in relevant ministries;
-There was a general agreement that there is a need for common Regional Standard Operating Procedures including minimum standards for the treatment of migrants;
-There was also consensus that there is a need for on-going exchange of experiences and best practices;
-Ministers further re-affirmed the need for harmonized border management systems and integrated regional information management system
-Member States agreed to address irregular migration challenges by increasing public awareness as well as promoting legal labour mobility channels and opportunities.

-SADC Member States were encouraged to expedite ratification of the SADC Protocol on the Facilitation of Movement of Persons.
-Ministers agreed that there is a need to strengthen Diaspora Engagement and promote their participation in development to mitigate the effects of brain drain.
-In addition, Ministers agreed that regional migration policies have to promote the cooperation between countries of origin, transit and destination.
-Ministers acknowledged that there is a need to address labour migration challenges in a comprehensive way and develop policies that aim to harness the benefit of labour migration in Southern Africa.

The MIDSA Ministerial Conference was timely in view of the possibility of providing input to the forthcoming second UN General Assembly High-Level Dialogue on International Migration and the Development to be convened from 3 – 4 October 2013 in New York.

Ministers expressed deep gratitude to the Government of the Republic of Mozambique, IOM and the SADC Secretariat for generously hosting and supporting the MIDSA Ministerial Conference.

Issued by IOM and the Government of the Republic of Mozambique.